U.K. Fiscal Crisis: A Prelude or a Warning?

What Happened in the U.K.?

The precipitating event for the current bout of volatility was the U.K. government’s decision to cut corporate, income, and real estate taxes to boost growth. This package comes directly on the heels of the government’s estimated £60 pledge to limit household energy bills given the substantial increase in wholesale energy prices stemming from the war in Ukraine. While it is far too early to judge the economic effects of these policies, the market’s initial verdict is signaling that the U.K. may be on the verge of a balance-of-payments crisis. What this means is that the market is giving less credence to the government’s promises to fulfill their debt obligations either outright through a potential default or in real terms as higher inflation may be the government’s way to reduce its debt. Balance-of-payments crises are frequently seen in emerging market economies, a recent case being Sri Lanka, but are infrequent in more advanced economies with the most recent fears emerging during the euro sovereign debt crisis following the global financial crisis.

The proposed profligate spending of the new U.K. government is the primary factor behind the sudden erosion in confidence in U.K. financial markets; however, the initial conditions facing the government were difficult. First, the war in Ukraine and the broader increase in commodity prices over the past year resulted in a steady deterioration in the country’s terms of trade, i.e., the currency value of a country’s imports relative to their exports. The U.K. is heavily reliant on imports of natural gas and oil, with imported energy comprising nearly 40 percent1 of domestic energy supply. The combination of more expensive energy imports and strong underlying demand coming out of the pandemic has seen inflation rise above 10 percent. Unlike other advanced economies, government debt in the U.K. has a disproportionate share of inflation-linked debt, around 25 percent2 in the U.K. compared to less than 10 percent3 in the U.S., leading to a more negative relationship between high inflation and the budget deficit. Furthermore, the U.K. economy is still adjusting to the country’s decision to leave the European Union (EU) in 2016, with the ultimate effects of the decision on trade relationships, demographic trends, and productivity far from settled.

How Have Markets Responded?

The response in markets to the fiscal package was swift. The British pound nearly broke through parity against the dollar leaving the currency at its weakest level on record. Despite the 5 percent4 move, options markets are pricing in a significant premium to mitigate against further pound depreciation. Alongside the currency weakness, U.K. government bond yields increased significantly with the 10-year yield rising over 1 percent. The combination of currency weakness and increasing yield differentials is highly unusual in advanced economies underscoring the deep concerns about the sustainability of the U.K.’s fiscal outlook. The deteriorating outlook is prompting speculation that the Bank of England will hike interest rates during an emergency meeting to stem the currency’s losses and restore some stability to U.K. financial markets. However, the central bank released a statement Monday affirming that it would wait until their next scheduled meeting in November before deciding, meanwhile a further statement from the U.K.’s equivalent of the Treasury Secretary did little to moderate concerns. 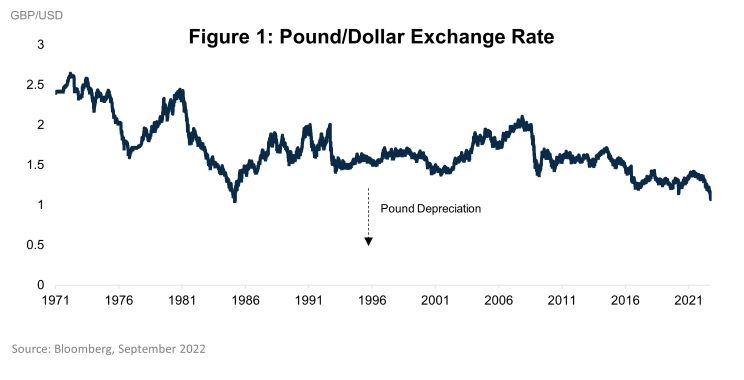 What Are the Global Ramifications?

The seismic events in the U.K. spilled over to global markets with sovereign bond yields increasing significantly and equity markets declining. The direct impact from the U.K. is first and foremost a volatility shock leading markets to price in more risk and increase the cost of insuring against risk. In fixed income markets, the correlation among advanced economy bond returns rose secularly over the past few decades due to the cumulative effects of global quantitative easing and greater capital markets integration. As a result, the shock in U.K. sovereign bond yields propagated out to the U.S., Europe, Japan, and others. In turn, this increasing return on risk-free, outside of the U.K. at least, interest rates and higher interest rate volatility lead investors to demand more compensation from riskier assets pressuring equities, credit, and any other asset further along the risk spectrum.

Beyond these first order effects of the shock, the events in the U.K. are a salient reminder of both the eroding fiscal picture in several countries, and the difficult growth and inflation trade-off confronting central banks. Germany finds itself in a similar position to the U.K. given its heavy reliance on imported natural gas from Russia to fuel its economy, flows that are significantly lower now due to the war. In response to the war and the European energy crisis it prompted, the country announced a raft of fiscal measures including nationalizing some utility companies directly affected by the energy spike, direct transfers, and more defense spending. Although Germany retains significant fiscal space given a relatively low debt-to-GDP ratio and firm budget rules, the shift in their stance could encourage other European countries to follow suit. Indeed, the recently elected government in Italy, a far more vulnerable country than Germany to external stress, may seek to relax budget constraints amid a poor economic outlook. Outside of Europe, it is hard to handicap how the events in the U.K. will affect politicians and their citizens’ demands for fiscal spending in the years to come, particularly given the unprecedented fiscal policies enacted during the pandemic.

The uncertain fiscal picture compounds the difficult outlook facing global central banks. The Bank of England and the European Central Bank will almost certainly have to weigh tightening policy as inflation sits at decade highs against an imminent, and potentially deep recession. In the U.S., the Federal Reserve’s decision will, hopefully, be less stark with only a period of below-trend or even slightly negative growth necessary to return inflation to 2 percent. Japan faces lower underlying inflation, continuing a 30-year trend, but a weak currency and reliance on energy imports may pressure the central bank to retreat from their ultra-loose stance in comparison to much of the world. The parallels to the 1960s and 70’s in the U.S. where higher fiscal spending was met with loose monetary policy and eventually stagflation are there if you look for them. However, we continue to believe that the Fed will not give up on its inflation goal despite the cost, but we are increasingly worried that other countries may.

Volatility. Unfortunately, much of the list of things we are focused on don’t lend themselves to forecasts: how will the war in Ukraine evolve; will the European winter be mild or severe and further strain energy markets; when will COVID-zero end in China; or will governments use the U.K.’s experience as a lesson in prudence. Therefore, we are focused on what we can control. We remain underweight risk and see cash as an attractive asset given higher yields and elevated volatility elsewhere.