Hope for Headline, Little for Core 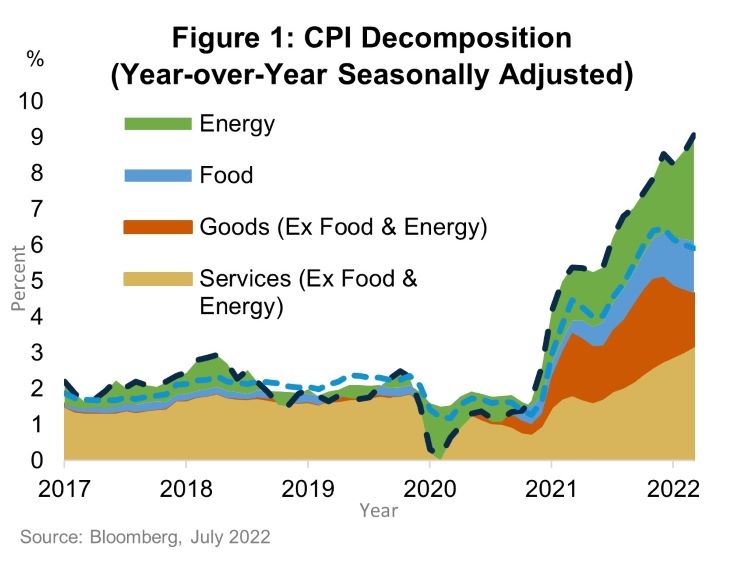 At the headline level, the sharp decline in commodities in July should reverse the notable acceleration in headline prices in June. However, accelerating core inflation elongates the path back to 2 percent. Despite notable inventory-related commentary from retail bellwethers like Target and firming signs of improved supply chains, core goods prices increased once again on a month-over-month basis. We are still waiting for evidence in the form of lower prices that the supply and demand effects of the pandemic are largely over (Figure 2). At the same time, services inflation will fuel concerns that higher inflation is already embedded in consumers’ expectations. 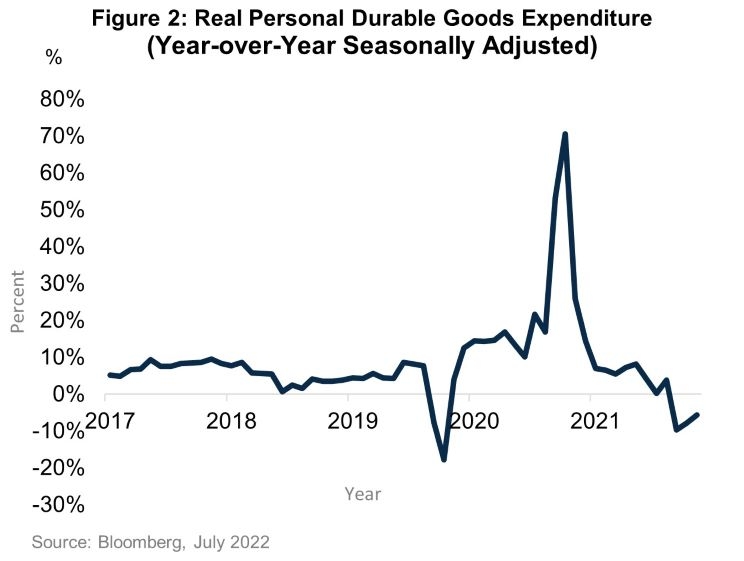 The 3-month, annualized rate of shelter prices, the largest component of CPI, is near 8 percent. Forward-looking indicators are improving as home prices have largely stalled and the repricing of rents is lower than last year’s rate of change, albeit still at levels exceeding 2 percent, but not fast enough to satisfy the Fed. Other services sectors sharply accelerated as well with transportation and medical care nearly doubling the pace from last month. The lesson for the Fed is that the labor market that existed in June was far too tight and that inflation is salient enough to feature in wage bargaining. These issues are not going to be addressed quickly and will support core inflation in the near-term.

No Rest for the Weary Central Bank

The Fed continues to be on the wrong side of price shocks. While the blame is not entirely their own, they are solely responsible for addressing high inflation and will act accordingly. The CPI print and the surprise 100 basis point interest hike from the Bank of Canada following the data has moved the market to price about 50/50 odds of the FOMC doing the same in 2 weeks. Inertia leaves us expecting a 75 basis point hike, but the Fed may capitulate to the market if pricing suggests it. Atlanta Fed President Bostic put voice to the Committee’s resignation saying that “everything is in play” following the data. In our view, it makes little difference whether it’s 75 or 100 basis points in two weeks, a recession is now the baseline view.

We think the flattening of the curve following CPI indicates that markets are coming to a similar conclusion. However, we think there is opportunity in the level of rates. There are a few different outcomes with varying probabilities that we think underlie current yield levels:

We think the likelihood of a sustained recession is underpriced. The Fed is facing high cyclical inflation and sustained acyclical inflation from supply side issues. As we have emphasized, the Fed’s tools affect cyclical inflation and expectations provide an anchor for both. Sustained acyclical inflation requires the Fed to enact a deeper cyclical slowdown to achieve their target. Furthermore, the inability to ease at the earliest sign of trouble is a departure from past cycles and could have unintended consequences. While we are optimistic that the excesses that magnified recent slowdowns like the financial crisis are missing this time, we remain wary of taking any risk that is particularly sensitive to a steep rather than shallow slowdown.

The Best Offense is a Good Defense

We remain focused on high quality, defensive positioning that should outperform in a slowdown. For equities that continues to be an underweight to the asset class, and an overweight to the healthcare sector. In fixed income, it’s investment grade credit with an overweight to long-dated Treasuries as we expect a cyclical slowdown to eventually force the FOMC to lower rates materially. We are hesitant to add spread risk as the distribution of returns skews towards higher rather than lower spreads and the current level of income is not sufficient to compensate for the most negative tail of the return distribution. Our bias remains to reduce rather than add risk.

This material does not constitute investment advice and should not be viewed as a current or past recommendation or a solicitation of an offer to buy or sell any securities or to adopt any investment strategy.

Basis points (BPS) refers to a common unit of measure for interest rates and other percentages in finance. One basis point is equal to 1/100th of 1%, or 0.01%, or 0.0001, and is used to denote the percentage change in a financial instrument.