The biggest takeaway from the July FOMC events was how little the FOMC’s thinking has evolved since the June meeting. In the interim, CPI, particularly core components, accelerated, meanwhile global Purchasing Managers’ Indexes (PMIs) decelerated, U.S. housing market data slowed, and the global backdrop remained volatile. It’s possible that the upside inflation surprise was offset by further risks to growth, but it was interesting that Chair Powell gave few details around how either development affected the Committee’s outlook. He repeatedly pointed to the June Summary of Economic Projections (SEP) as a reasonable path forward for interest rates.

Taking the median 2022 dot as a baseline, the Committee will hike interest rates by an additional 100 basis points this year. Combining that with Powell’s comment that “at some point, it will be appropriate to slow down” as interest rates rise above neutral, the most likely path forward is 50 basis points in September, followed by 25 basis points hikes at the November and December meetings. Markets begin to diverge from the Federal Reserve’s (Fed) forecast in 2023 as a straight read of current pricing indicates a peak rate below 3.5 percent, compared to the 3.75 percent in the Fed’s dot plot.

We don’t think that this divergence in terminal rate pricing is significant, but we think the market is overestimating the Committee’s willingness to cut rates rapidly by the end of 2023. Current pricing suggests around 50 basis points of cuts by year-end, which runs counter to Chair Powell’s comment that the Committee “wants to see demand running below potential for a sustained period.” The read-through is that interest rates will persist near their terminal levels for several months before the FOMC has clear and convincing evidence that inflation is returning to trend. 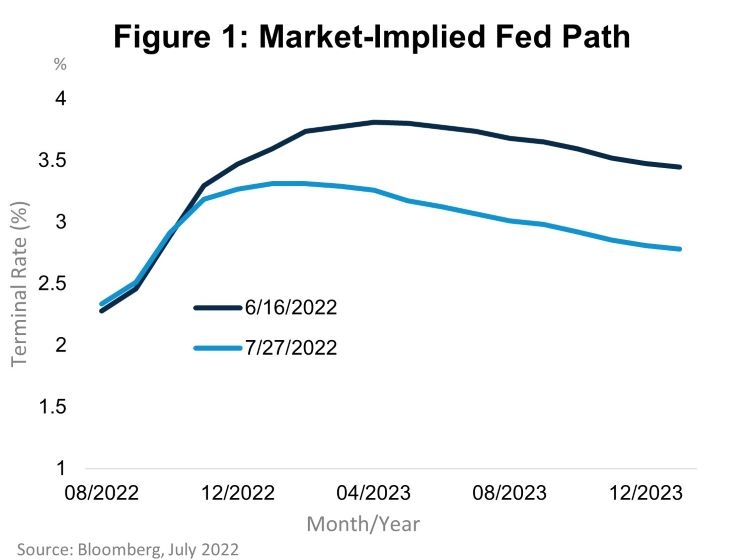 Reporters peppered Chair Powell with several questions on a recession, what does one look like, are we in one, what would cause the Fed pivot, which echoes the line of questioning we have been hearing in many Q2 earnings calls. The short answer is the labor market is too strong for a coincident recession. However, the questions brought forth a more extended assessment of both the current state and desired softening of the labor market. The most revealing comment from Powell was that he agreed that the equilibrium unemployment rate was far above the current level of unemployment, he did not object to 5 percent as a reasonable guess, an explicit acknowledgement that the labor market significantly overshot sustainable levels. He pointed to clear evidence for this in the job openings to vacancies rate, anecdotal reports from the Fed’s business contacts, and several other metrics.

The simplest inference is that the unemployment rate should rise to at least 5 percent to undo the excesses of the labor market. Powell offered a more nuanced view. The Chair argued that the excesses evident in the demand for workers can be curtailed through lower bargaining power first, as openings and wage inflation decline, instead of resulting in higher unemployment. As this is happening, the matching problem, think of the effects of lockdowns on consumer-facing industries as one example, that drove the natural unemployment rate higher could fade. This is the narrow path to a ‘soft landing.’ We think it’s unlikely given how elevated inflation is and the possibility of further shocks. With the risks remaining skewed toward higher long-term inflation expectations, 5 percent unemployment seems like a reasonable floor at some point this cycle as the Fed will be unable make policy based on its baseline forecast until the distribution of outcomes normalizes. 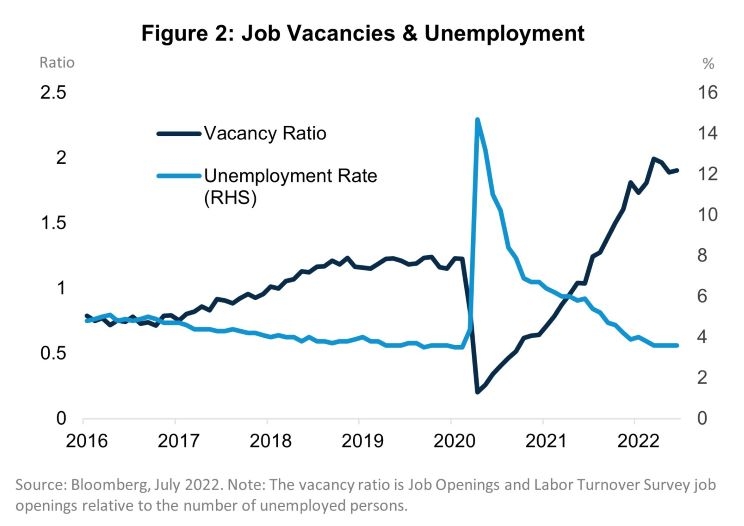 The last month has challenged our preference for less risk and higher quality as markets bounced off their year-to-date lows. We expect this volatility to continue as markets weigh the significant compression in valuations versus the tightening still to come. However, we remain convinced that our underweight to equities and credit is appropriate given the balance of risks to the U.S. economy. The healthcare sector, specifically, and profitable exposures, generally, are our highest conviction bets. Within fixed income, we are overweight duration via the long-end of the curve and continue to prefer Agency Mortgage-Backed Securities within investment grade securities.

Mortgage and asset-backed securities may be sensitive to changes in interest rates, subject to early repayment risk, and their value may fluctuate in response to the market’s perception of issuer creditworthiness; while generally supported by some form of government or private guarantee there is no assurance that private guarantors will meet their obligations.

Fixed income investments are affected by interest rate changes and the creditworthiness of the issues held. As interest rates rise, the values of fixed income securities held are likely to decrease and reduce the value of a portfolio.