December FOMC: Dealing With The Unknowable

The prepared materials released by the Committee were hawkish relative to expectations ahead of the meeting. The statement retained language indicating that ‘ongoing increases in the target range will be appropriate,’ an area of focus for markets as to whether a Federal Reserve (Fed) pause is imminent in Q1 2023. Also, the median SEP dot for 2023 indicated 3 additional hikes, up from 1 as of September, further lowering the odds of a Q1 pause. Moreover, the constellation of dots from FOMC members in 2023 and 2024 skewed towards higher rate outcomes over those horizons, highlighting the strong consensus for sustained restrictive policy. Beyond the rate path guidance, the FOMC’s economic forecasts also signaled more concern about persistent inflation as 2023 headline and core Personal Consumption Expenditure (PCE) estimates were revised higher.

Going into the press conference, we thought it would be difficult for Chair Powell to strike the right balance between the need for further tightening and acknowledging the positive inflation surprise. However, volatility during the press conference was relatively subdued as we learned little about the most pertinent issues. On the likelihood of a recession, Powell noted that no one really knows anything, which was one part humility, one part avoiding the question. About how much unemployment needs to increase, there’s a chance that an increase from 3.7 to 4.6 percent, the 2023 SEP forecast, is enough or even too much, but the “structural labor shortage” he referenced skew the risks toward higher outcomes. Whether we have turned the corner on inflation after the last two surprises, “it will take substantially more evidence to give confidence that inflation is on a sustained downward path.”

We did learn that the Committee appears biased to slowing the pace of rate increases to 25 basis points. Without committing to anything, Chair Powell acknowledged that the cumulative effects of past rate hikes is material and that the pace of further increases is less important as policy is in restrictive territory. The forthcoming data will tip the scales on the size of the next hike, but right now 25 basis points in February looks more likely to us. The answers to the questions on pace and level boil down to how the Committee perceives the impact of past and future rate increases on financial conditions. In response to a direct question on whether the easing of financial conditions recently as equities increased, spreads tightened, and interest rates declined was a problem, Powell, indirectly, seemed to say yes. He noted that the Committee’s intention to increase rates further indicated that policy is not sufficiently restrictive. As a general principle, the Committee does not want to comment on the ‘fair’ value of any specific asset, but we interpreted his answer as an indication that the Committee thinks tighter financial conditions are necessary, whether equities decline, spreads widen, etc.

Expensive Price to Pay for Risk 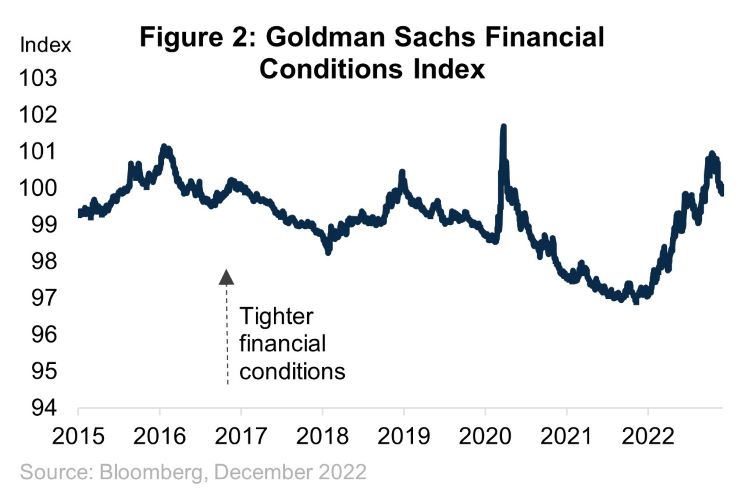 Now that the FOMC events and the November inflation data are past, we think risk/reward remains skewed to the downside for risk assets. The odds of a soft landing have increased with the successive inflation prints and the floor for asset prices alongside them. However, markets are much closer to discounting this outcome rather than the material risk of a recession. Earnings estimates have come down since their mid-year peak, but still imply healthy growth next year. Credit spreads are close to the levels that prevailed prior to Russia's invasion of Ukraine. Rates markets imply a brief stint at the terminal rate before cuts could begin in the second half of the year. All of this strikes us as optimistic given the expected costs of the FOMC’s intention to keep rates elevated. Therefore, we continue to be underweight equities, preferring lower volatility sectors and up in credit quality.

A basis point is one hundredth of 1 percentage point.