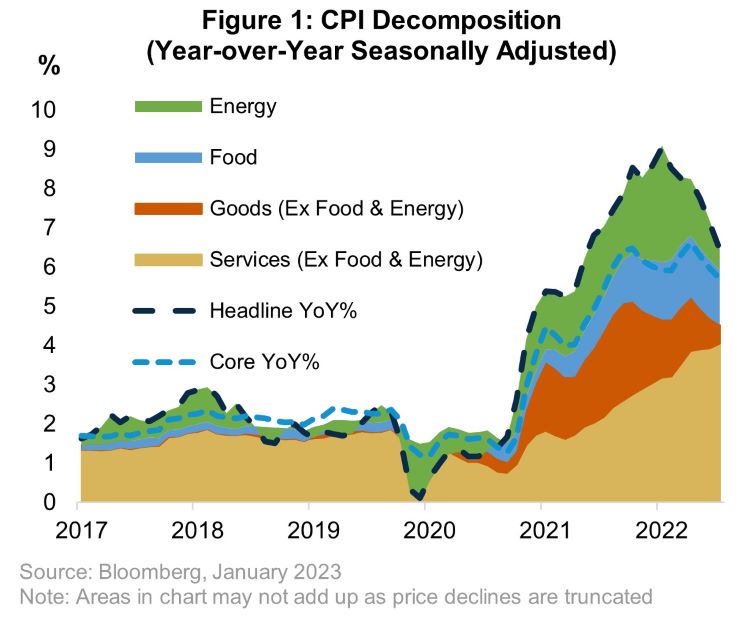 Headline CPI for December declined one tenth of a percent and core CPI rose 0.3%, respectively, in line with consensus forecasts. Once again, the largest contributors to the deceleration were energy and used car prices. The former reflects the significant decline in gasoline prices during the 4th quarter. The strength in food prices also waned as the broader commodity complex leveled off. Commodity weakness is likely to reverse in the coming months as China reopens and Europe appears likely to avoid a gas crisis given seasonally warm weather unless global growth decelerates. The weakness in used car prices bled into new car prices, which declined for the first time since January 2021. The weakness in car prices and goods more broadly is expected to continue as declining demand meets a recovery in supply.

Within services, shelter inflation surprised to the upside at 0.8 percent month-over-month matching the fastest monthly increase since the pandemic. Despite our and the market’s focus on shelter for most the past two years, the sector has become an afterthought given widespread recognition of the lagged nature of the index and clear signs that real-time rental inflation is declining. While we expect shelter inflation to decline and looking through the current strength makes sense, a less rapid decline will complicate the Fed’s messaging with the official data well above target despite their confidence that real-time inflation is significantly lower. The Fed’s public stance in 2022 eschewed forecasts in favor of realized progress in the data, which will likely be unsustainable soon if monthly inflation, excluding shelter, declines further. Increasing their reliance on forecasts is more appropriate at this stage, but we worry that communication concerns will mean the Fed shifts too late. 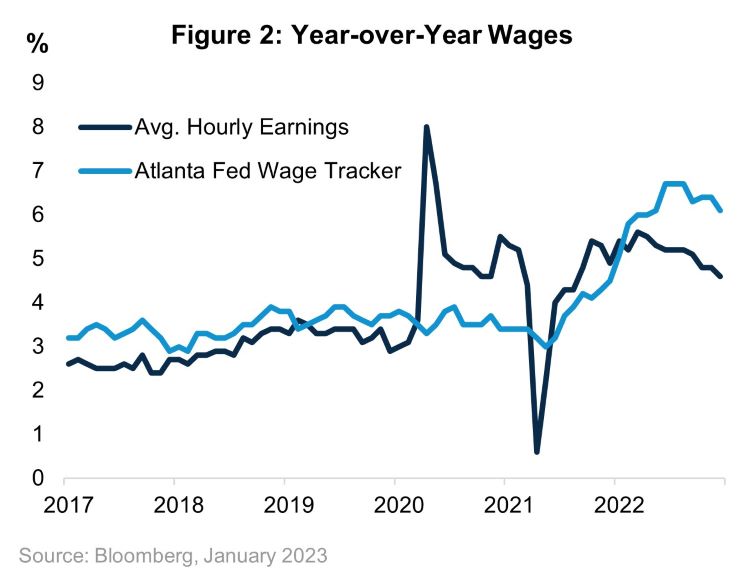 The progress on spot inflation leaves high wage growth as the most pressing concern for the FOMC as wage growth, net of productivity gains, should determine inflation in the long run. Here the recent data has been promising as well. Most notably, average hourly earnings for December and revisions to prior months led to a significant decline in the year-over-year pace of wage gains to 4.6 percent. Soon after the December CPI, wage data from the Atlanta Fed corroborated the decelerating wage story as its median wage growth series decelerated from 6.4 to 6.1 percent in December. Adding wage and inflation trends, the evidence is mounting that inflation will return to 2 percent.

The question is how much of what we are seeing in prices reflects the Fed’s actions rather than simply mean reversion as the combined effects of the reopening, and fiscal and monetary stimulus wane. Our view is that the effect of the Fed’s ongoing tightening cycle is magnifying meanwhile the “transitory” effects of the pandemic on inflation are proving to be just that. With this lens, the deceleration in inflation is more concerning given the Fed’s intent to hike interest rates a few more times. Their risk management bent this hiking cycle has always been to error on the side of doing too much rather than too little given how high inflation became. So, while the news on prices should lay to rest concerns about a lasting high inflation regime, the pronounced decline in leading indicators like PMIs, the housing sector, and tighter credit standards leads us to believe that overdoing tightening is the base case.

Avoid The Risks You Aren’t Paid to Take

Despite shifting the odds of a soft landing higher, the odds are not in your favor, nor are you being paid to take that risk. We remain cautious on risk assets and prefer lower volatility, and higher quality exposures within these asset classes. For fixed income, we continue to think it outperforms equities in 2023 while delivering positive real returns. High yield debt appears rich relative to higher-rated credit given the expected differential in default rates between the two groups. A synchronized decline in inflation and lower U.S. rates should disproportionately benefit emerging markets absent a severe growth slowdown.

This material does not constitute investment advice and should not be viewed as a current or past recommendation or a solicitation of an offer to buy or sell any securities or to adopt any investment strategy.