Over recent history, product development efforts have disrupted the investment landscape and elevated the prominence and assets of low-cost index solutions within investor portfolios. In addition, increased information flow and data availability have raised questions surrounding active managers’ ability to effectively and consistently outperform their respective benchmarks. This scenario has most notably taken shape within the U.S. large cap equity category. This has been exacerbated by perceptions pertaining to the heightened level of efficiency of the asset class and investors’ increased ability to manage their U.S. large cap exposures more cost effectively with index products. Despite this trend, Harbor Capital Advisors believes overlooked catalysts such as high index concentration and changing macroeconomic conditions are likely to provide tailwinds for active U.S. large cap manager outperformance moving ahead.

A common challenge to employing active management within U.S. large cap equities pertains to the headline worthiness of mega cap stocks and the relatively elevated number of buy and sell side analysts covering them versus other asset categories. This has led to many investors viewing the segment as “too efficient,” potentially posing headwinds for active U.S. large cap managers in gaining alpha edge relative to the broader investing public. 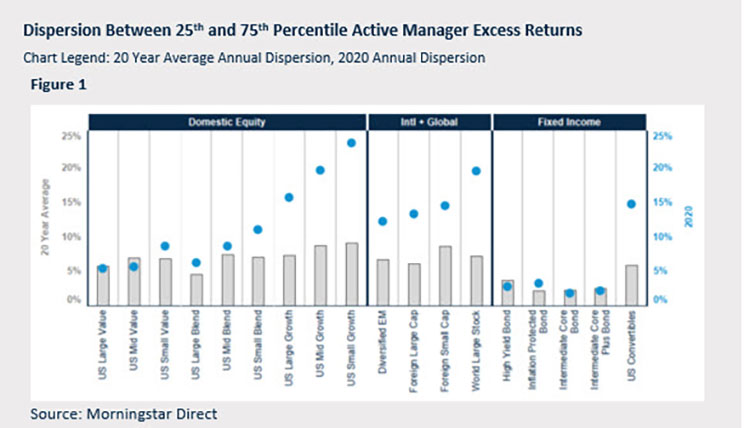 U.S. large cap benchmarks have become highly concentrated in bellwether names such as Facebook, Apple, Amazon, Microsoft and Google. In fact, the S&P 500 & Russell 1000® Growth weightings in these top 5 holdings were 22% and 37%, respectively as of 6/30/2021. Looking ahead, Harbor believes this heightened level of index concentration should be considered when assessing active versus index investment within the U.S. large cap space.

Figure 2 represents the rolling 3-year return rankings of the S&P 500 Index relative to the active U.S. large cap blend universe, as well the Russell 1000® Growth Index versus the active U.S. large cap growth universe. This shows that the performance of active versus index strategies has been reasonably cyclical over time and hasn’t trended in one direction or another.

Overall, this is not a prediction of a repeating near-term unwinding of index concentration. However, the more indexes become concentrated in only a few names, active managers are better able to produce differentiated portfolios and become less tethered to any potential unwinding down the road.

Indexes like the S&P 500, Russell 1000® Growth and Russell 1000® Value can be prone to growing factor risks such as size and stock concentration and can also change their composition more frequently than most investors realize. 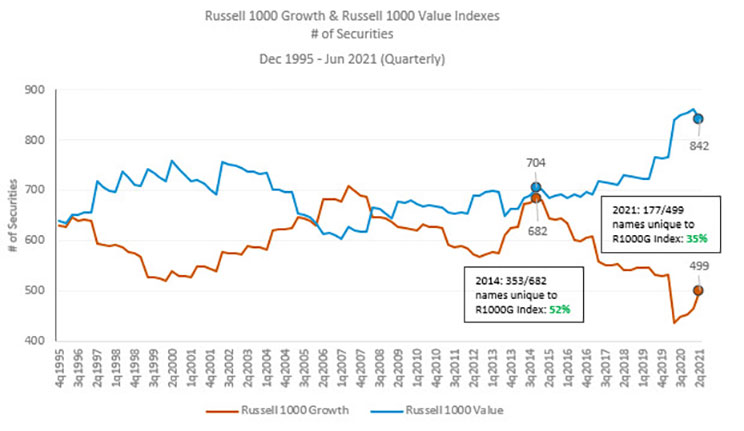 The changing index landscape has resulted in crosspollination of holdings across styles and growing factor risks given a lack of outlets for these mega cap companies to graduate to. More critically, low-cost index solutions are likely not as diversified as investors believe them to be.

Price-to-Earnings multiples have largely been expanding for U.S. large cap equities since the economy emerged from the Global Financial Crisis (GFC). This has been partly attributed to ultra-loose monetary policy, which has buoyed risk assets and resulted in a rising tide lifts all boats dynamic benefiting broad index performance. As shown in Figure 4, in the lower left-hand chart, where the S&P 500 price-to-earnings ratio has steadily widened from March 2009 to June 2021, while the benchmark’s rolling 3YR return rankings versus the active U.S. large cap blend category have consistently ranked above median over the same period.

However, the opposite has proven true in periods of stable or compressing multiples where company specific fundamentals have mattered more in generating returns as shown in Figure 4, in the lower right-hand chart. From January 2000 to February 2009, S&P 500 price-to-earnings ratios were generally falling or stable. Concurrently, the benchmark’s rolling 3YR return rankings consistently ranked below median versus the active U.S. large cap blend peer group of managers. 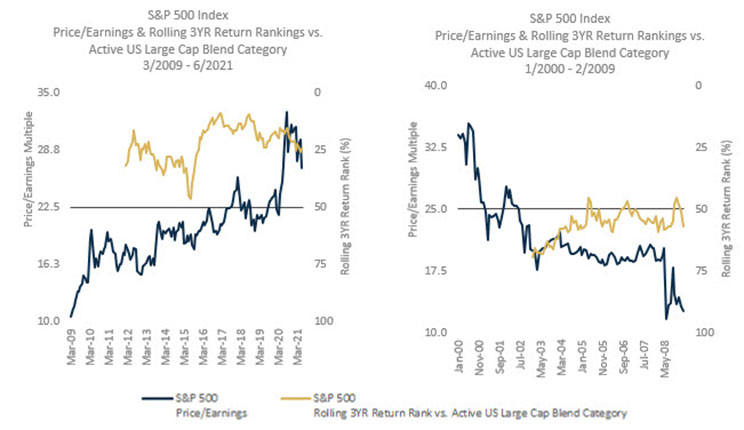 Looking ahead, with price-to-earnings multiples having increased meaningfully in 2020, it appears unlikely that investors will be able to rely on their continued expansion to drive future index returns. In addition, monetary policy appears likely to change course following the strong economic growth realized throughout the 2021 recovery. As such, stock returns will likely be driven more by company specific fundamentals as opposed to macroeconomic conditions. This should serve as a tailwind for active managers within the U.S. large cap equity space moving forward.

In summary, Harbor believes it is important to look beyond common convention and cost when considering active versus index solutions within the U.S. large cap equity space. Analysis of manager excess return dispersion signifies that U.S. large cap remains a fertile area for active outperformance. In addition, heightened index concentration could again prove more favorable for active managers with differentiated positioning versus their respective benchmarks. Investors should also employ caution pertaining to recent benchmark composition changes, which include crosspollination of holdings across styles and growing factor risks. Lastly, the post GFC landscape of ever-expanding price-to-earnings multiples and easy monetary policy could be nearing its end. As such, investors are likely to place more emphasis on company fundamentals, which should serve as a tailwind for active manager outperformance for the road ahead.

The S&P 500 Index is an unmanaged index generally representative of the U.S. market for large capitalization equities. This unmanaged index does not reflect fees and expenses and is not available for direct investment.